“To give anything less than you best is to sacrifice the gift.” These words, spoken by Steve Prefontaine, summed up who he was and how he raced. In every competition, he would give it everything he had to make sure he ran his absolute best. This athlete shattered every american distance running record, starting in high school, and became a household name. His untimely death at the age of 24 shocked the world and, over 40 years later, people still view him as one of the best distance runners of all time.

Steve Prefontaine was born in the blue-collar town of Coos Bay, Oregon on January 25, 1951. Son to a carpenter and seamstress, it was the dream of Steve’s parents for him to go to school and get a college education. Always rambunctious and full of energy while growing up, Steve focused more on activities than academics. Trying out for football and basketball but being benched because of his small stature, Pre tried out running in gym class and fell in love with the sport. 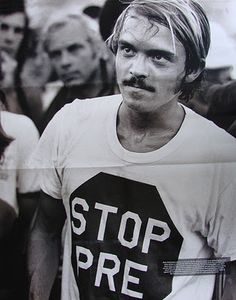 Considering his ability, it was no surprise that dozens of schools were recruiting him. In the end, he chose to run for the University of Oregon under Bill Bowerman, a man who would later co-found Blue Ribbon Sports, now known as Nike. Under the guidance of Bowerman, Prefontaine quickly became a force to be reckoned with in the Collegiate world. Having run collegiately four years, he won four 5,000 meter championships in Track & Field and three championships in Cross Country. Throughout his collegiate career he had only lost 3 races, all of which were in the mile. He never lost a race at 3miles, 5k, 6 miles, or 10k.

While in college he also set his sights on the 1972 Olympic games in Munich, Germany. At the Olympic trials he set the American 5000 meter record of 13:21.9. With a slow start in the Olympic 5000 meter race, Prefontaine did everything he could to pick up the pace in the final mile but eventually ran out of gas and ended in a heart-breaking 4th place, being passed by Ian Stewart of Britain in the last 10 meters to deny him the bronze medal.

After college, Pre began training for the 1976 Olympics in Montreal. While training, a Prep meet was held in Eugene, Oregon where Steve won the 5000 meter race. After the meet, athletes attended a party to celebrate. While returning home after the party, Prefontaine lost control of his 1973 MGB convertible and swerved into a rock wall. The car flipped and the weight of the car eventually crushed him. He was pronounced dead at the scene. At the time of his death, Steve held the American records for every race from 2000 – 10000 meters. The next morning the news of Pre’s death swept the nation. The day after his funeral a memorial service was held at Hayward field (the University of Oregon track) where thousands attended from all over the world.

15 Sep 1972: Steve Prefontaine of the USA in action during a track and field event at Crystal Palace in London, England. Mandatory Credit: Tony Duffy

While his running accolades were some of the best ever seen, what really set Steve  out from the crowd was his racing philosophy and his attitude. Prefontaine was a front-runner. Famously known for saying “The best pace is a suicide pace. Today feels like a good day to die,” Pre would always push the pace and put every ounce of strength he had in to the race. Although he loved to win, many believed he was racing more against himself. He didn’t want to win a race by sitting back and out sprinting everyone at the end, he wanted to see just how fast he could go on that given day, regardless of competition.

He also spoke out against the Amateur Athletic Union (AAU) who, at the time, would not allow Olympic athletes to receive financial compensation. Pre was one of the athletes who began the fight against the AAU which eventually led to Olympic athletes being able to receive financial compensation, allowing them to focus on their sport throughout the year instead of finding odd jobs to scrape by. Prefontaine, along with Jim Ryun, Frank Shorter, and Bill Rodgers generated a lot of media coverage, helping to inspire the running “boom” in the 1970’s which still emanates to this day.

For such a short life, the impact Steve Prefontaine left on the running world will never be forgotten. Between his running ability, his hubris, and his principled beliefs for amateur athletics, his impact continues to resonate in athletics. However, there still is one question, asked by many but never to be answered, regarding Steve Prefontaine. How fast could he have become had he not died at the young age of 24?

Today, Steve Prefontaine’s memory lives on through movies and books documenting his life, Pre’s Trail, the Prefontaine Memorial where the accident occurred, the Pre Classic, one of the most popular and reputable track meets in the world, and memories of those who knew him and others who wish they had.