Ok, maybe don’t stop altogether, but you don’t need as much stretching while training as you may think. One of the more interesting effects of run training is reduced flexibility in the joints of the lower legs. In a word, the more you run, the harder it is to touch your toes.

Flexibility is generally thought of as a good thing, and therefore the loss of flexibility that results from running has generally been thought of as a bad thing. But think about it: Why would running cause a physiological adaptation that was bad for running? We know that every other physiological adaptation to running is good for running. Increased bone density, increased muscle glycogen storage, increased muscle mitochondria density, reduced body fat stores—all good. Why would these helpful adaptations be accompanied by one—reduced flexibility—that is not? 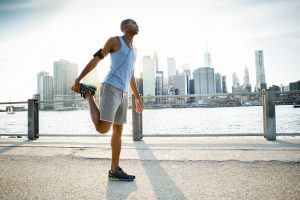 The answer, of course, is that the effect of running on flexibility is not hurtful but is in fact helpful like the others. The natural tightening of the lower leg joints and connective tissues that occurs in response to run training allows the muscles to function as stiffer springs that are better able to capture energy from ground impact and reuse it to propel forward motion than untrained legs. This improves running economy by allowing the runner to use less energy to sustain any given pace. Boing, boing, boing.

One study  compared running economy and flexibility in 21 male runners. The researchers found an inverse relationship between lower leg joint flexibility and running economy. In other words, the harder it was for a runner to touch his toes, the more economical his running was.

If flexibility is bad for running economy, then why would any runner want to stretch? It’s more complex than that. First of all, flexibility is not bad for runners in an absolute sense. It’s important to have normal range of motion in the ankles and knees, and other research has shown that the best runners actually have greater range of motion in the hips than slower runners.

While running itself won’t reduce your range of motion to a degree that hampers your running, sitting might, and most of us sit a lot more than we run. Years of sitting causes a adaptive shortening of muscles such as the hip flexors that compromises the running stride and increases injury risk. “Adaptive shortening” means the muscles behave as if they have shrunk, even though they haven’t, because they constantly hold tension. 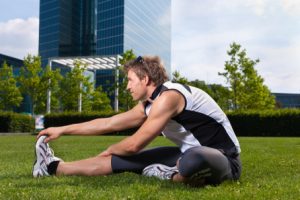 Interestingly, another study found that less flexible runners had better running economy also found that runners who had longer Achilles tendons and patellofemoral tendons had better running economy. Now, you can’t change the actual length of your tendons any more than you can change your height, but you can use stretching to reverse the functional shortening of muscles and tendons that results from sitting and wearing shoes.

Another complicating factor is age. The older we get, the less flexible we become, and past a certain point, age-related loss of flexibility compromises running performance. Stretching, and to an even greater extent, doing functional strength exercises that take joints through a full range of motion, can counteract this process and help you run better later in life.

While running itself does not cause a loss of flexibility that you need to try to reverse with stretching, it’s still not a bad idea to stretch a little as a runner. It will restore functional length to muscles and tendons that are functionally shortened by sitting. It can also be used to increase range of motion at the hips, which is one joint that benefits from greater-than-average range of motion (and is also one joint whose mobility is not normally reduced by running).

Want more great tips and information about running? Be sure to check out more posts in the “fitness” section of our blog! Inspiration for this article and excerpts taken from Matt Fitzgerald’s article written July 3, 2014 on Competitor.