After many days of thinking about it, I finally got around to cooking the Spaghetti Squash Chow Mein recipe that I have been excited about trying for a while. One mistake I had made was not cutting the squash in half. The proper way to cook a spaghetti squash is to cut it in half, but I couldn’t find a knife sharp enough to perform this task.Instead, I baked the squash whole, 45 minutes at 400 degrees.

While that was baking, I did dishes and a load of laundry. I also picked up clothes, toys and other various items that the kids left around the house. It’s always nice to take care of cooking and cleaning at the same time!

After the house was picked up, I returned to the kitchen. The next step was to chop up the onion, three stalks of celery, half of a cabbage, and half of a bag of baby carrots. I sautéed these all together in my iron skillet with some extra virgin olive oil. While that cooked, I whisked coconut aminos, ginger, garlic, white pepper, and some raw honey. I then set all that aside and removed the squash from the oven.

Now here is where things got interesting… I placed the knife to the skin of the squash and the blade slid neatly into the flesh. I halved and seeded and scooped the first spaghetti squash without incident. I bought two squash since they were on the smaller side. I proceeded to disassemble the second squash just as I had the first. Unfortunately, as soon as I pierced the shell of the second squash, time slowed down. 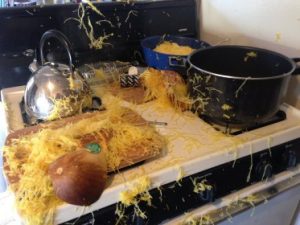 I could only gape in horror as the spaghetti squash inexplicably combusted. I had strands of hot, squishy gourd all over my face and hair, my neck and chest, and all on the underside of the cupboard and over the counter top. Spaghetti squash reached places in my kitchen I didn’t even know existed. I cleaned it up, still in a stupor as to what caused the explosion. Despite this incident, I pushed onward with the recipe and combined the squash with the vegetable mixture and the sauce.

I slowly mixed it all on low heat and gave it a taste. A little spicy, but I’ve always been one to enjoy a little spice in my life. 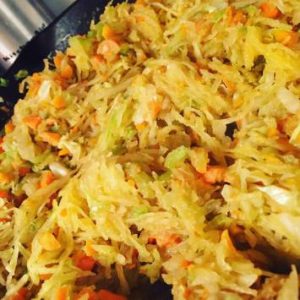 This is another recipe with a high yield so be prepared to have leftovers!

1 large or 2 small spaghetti squash. (Unless you are confident you will be able to cut it in half, get the kind that is already peeled and cut. Safety first!)

½ of a bag of baby carrots

Looking for more great recipe ideas? Check out the recipe portion of our blog!