Chiropractic and Ear Infections: Does it Help?

If you have kids, it’s likely you know a thing or two about ear infections. In the United States, at least half of all children experience and ear infection by their first birthday. Children are more prone to ear infections due to their immature Eustachian tube (part of the middle ear), which in infancy and early childhood is shorter and angled. This allows bacteria to more easily access the middle ear. While ear infections are most common in children, adults can experience them as well. 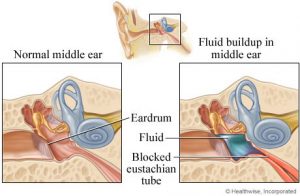 Luckily, there are non-drug treatments for this common condition. Read on to learn about how chiropractic can decrease ear infections.

Ear infections are caused by a bacteria or virus in the middle ear, and can be painful due to inflammation and a build-up of fluids. Colds, flu and allergies can bring on an ear infection due to the congestion and swelling of nasal passages, throat and Eustachian tubes. When the Eustachian tubes are swollen they are unable to drain the fluid.

The Eustachian tube is controlled by a group of muscles called the tensor veli palatini. When working properly, these muscles open and close the tube to allow for proper drainage. If these muscles aren’t able to function properly then no drainage can occur, increasing the likelihood of an ear infection.  These muscle are controlled by nerves that begin at the top of the neck. If the bones in a child’s neck are misaligned it could interfere with those nerves.

In most cases, the symptoms and signs of ear infection develop rapidly. The most common symptoms include:

Symptoms to Look for in Children

Typically, ear infections clear up on their own, so minimal intervention is often the best route to take. Medical doctors will sometimes recommend antibiotics, especially for infants and in severe cases, as well as NSAIDs to relieve pain. Unfortunately, while helping the child to feel better, these NSAIDS aren’t fixing the problem. Also, there are side effects associated with short and long-term antibiotic and NSAID usage, and it’s best to use them as sparingly as possible.

In a 1996 study, forty-six children under the age of five received regular chiropractic adjustments to treat the symptoms of ear infection, and researchers found that 93 percent of all episodes improved, 75 percent in 10 days or fewer and 43 percent with only one or two treatments.

If you have questions or have a child that is experiencing the symptoms listed above, please schedule an appointment today.

If you want to learn more here are references to studies showing how chiropractic can help ear infections:

The Safety and Effectiveness of Pediatric Chiropractic: A Survey of Chiropractors and Parents in a Practice-Based Research Network (Abstract), EXPLORE: The Journal of Science and Healing, 2009